The Route Four is an 8HP sequential switch with control over direction as well as reset. Alternatively the active step can be selected via binary addressing. The module is made up of four bi-directional switches which are normalised on one side, meaning the switch can be used in a number of ways including 4 to 1, 1 to 4 and even 4 individual switches.

The panel for this module is double sided so can be fitted either way up. For the purpose of this manual we will assume the panel is fitted with the controls at the bottom and switches at the top.

At the top of the panel we have the four switches. Each switch has an LED between the jacks to indicate which stage is active. Below the LED is a binary representation of the switches address.

When the module is in Address Mode the filled circles indicate which of the up/down or step buttons or input jacks need to be pressed or high to select that stage.

The arrows on the right hand switch jacks indicate that this column is normalised together. This normalisation is in a loop so placing a patch cable in any of the right hand jacks connects you to all of them until another jack is inserted.

The video above should help to visualise the normalisation

Below the switches we have the 3 control inputs. Up/Down selects which direction the switch is clocked. Reset sets the switch back to stage 00 and the Clock input moves the switch to the next stage.

All of these inputs are comparator based meaning they will operate with any signal that crosses the switching threshold – meaning that as well as gates and triggers, bipolar signals from LFO’s and oscillators along with signals such as envelopes can also be used as long as they have a high enough amplitude.

Moving further down the panel we come to the two mode switches.

When the switch is set to latching each time a high signal is put into the Up/Down and Clock inputs or either the Up/Down or Step Buttons are pressed that stage toggles between high and low.

This mode enables each stage to be selected via it’s 2 bit binary address.

At the bottom of the panel there are 3 buttons for manual control of the switch. Every effort has been made in the design of this module to give a clean switching action when the buttons are used.

The Up/Down, Reset and Step Buttons can be used alongside inputs. Each of the buttons is linked with it’s associated input with a logical OR function. This means for instance, if the Up/Down input is being held high pressing the Up/Down button will have no effect as that control is already high. 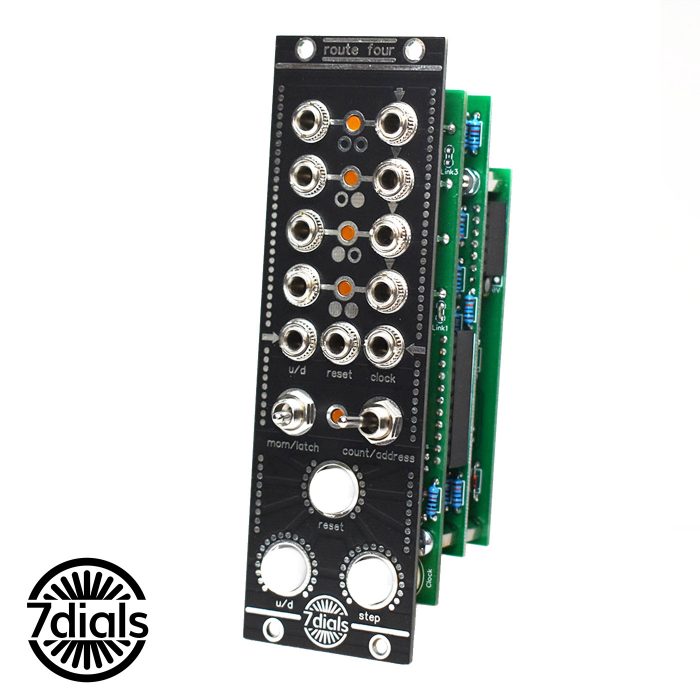