Note: this is a partial kit only

The TB-O shares the same saw-core oscillator circuit as the Roland TB-303. It also generates the distinctive, not quite square using the same technique as the original, including making use of the same transistor types – afterall, the name is Transistor Bass…

The module can output four waveforms simultaneously, all controlled by the same single 1V/octave CV input.

As you would expect we have the Saw and Square as provided by the original 303. The TB-O adds pulse width control to the square wave which can be applied in two ways. Using the PW knob you can manually dial in the PW you desire (flick the switch to the left). The original, almost 50% duty cycle can be found at around 10 o’clock on the PW knob. Secondly, using a CV source for PWM with an attenuator knob to set the strength of your PWM signal (flick the switch to the right). The input is expected to be in the +/-5v range. Again the 303 waveforms are unique in their offset and range, being offset +5v with an amplitude of about 7v. The circuitry will compensate for this but only if the input is in the +/-5v window. Both of these modulated waveforms are output from the square jack, but only one type of PW modulation can be applied at a time, based on the direction of the switch.

Due to the way the TB-303 wave-shapes the saw into the square, when you adjust the PW it changes both the offset and the amplitude of the waveform. Be careful at extreme PW settings both via the knob and CV control as the signal can get quite hot – extending outside the normal 10V p2p of Eurorack.

There are two other waveforms, a very quiet (as most are) triangle. Triangles are very pure, so not much harmonic fun here. The final waveform is a sort of shark-tooth-saw-sine (STS) strange shape. Both are included as bonus outputs which were stumbled on when playing around with wave-shaping the saw. The STS wave sounds similar to the Saw, but can also be modulated with the PW and PWM controls.

The module also includes some basic FM capability via another CV input. As with most FM, sine waves are an ideal modulator for this input, and very high frequency sine waves or even squares can give a really nice gritty edge to the waveforms. 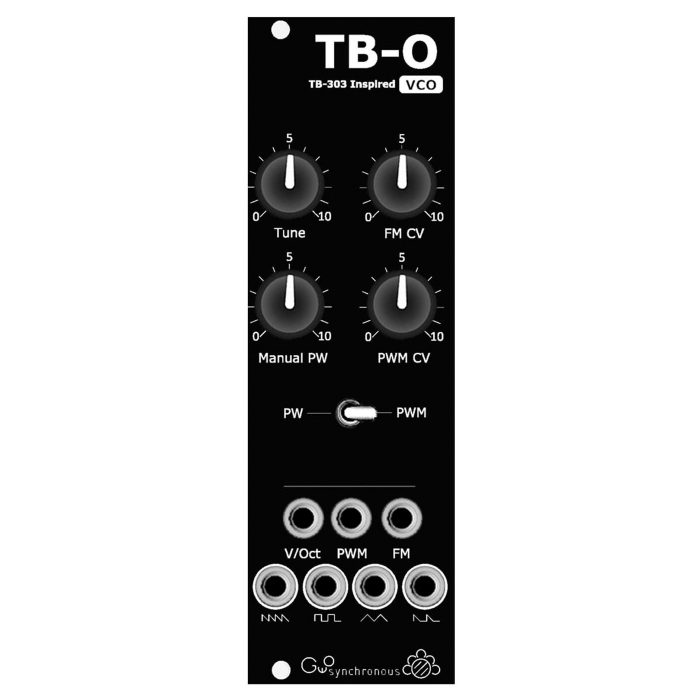