Please note that the to make the intended 40 band string filter – you need to order two of these PCBs.

Jürgen Haible’s original String Filter pcb (100% identical to the original) is now available again – freshly made 2016 in Germany in the same factory as the original pcbs. There are no changes on the pcb, i.e. you get the exact same pcb as if you had ordered it in 2010.

Please note that the to make the intended 40 band string filter you need two of these PCBs.

In 2004, I built a String Filter – I even made a PCB layout for this, which was untypical for me at the time. (Built most of my stuff on veroboard back then.)
I liked it a lot, and I got a lot of positive feedback for the sound demos.
Unfortunately, the filter topology, a variant of the GIC filter and probably my own invention turned out to be a failure: It worked, but I only got it to work stable with NE5532 chips of a certain date code. Hardly something I could publish for other DIY’ers to build.
Now, I’ve started that project all over again, with a different filter topology.
Also very different from the classic Electronotes single-opamp filters (and as far as I can tell, also from Moog’s string filter), I’m now going for a two-opamp biquad topology. This generally not so well-known filter uses two integrators like the ubiquitous 3-opamp state variable and biquad filters, but unlike these, one of the integrators is non-inverting: The so-called Deboo-Integrator.
But before I describe the new project, which will also be awailable as PCBs (if everything work as intended, this time!), I insert the information of my old string filter project here:

A string filter has been on my personal wish list for a long time. The above mentioned Electronotes articles give a good description what is possible with multiple resonances, and also describe a feedback method to control depth of the peaks and notches, starting with filters of fixed Q. And there is the legendary (and rare) Moog CE String Filter that is based on a similar principle.
The Moog filter uses Norton Amplifiers, Ian has used discrete transistor circuits, Bernie has used Deliyannis filters with opamps.
My version is based on LC resonators, where the inductors are replaced with 2 opamp, 4 resistor General Impedance Converters. The advantage of this is that there are only 4 equal resistors, two equal capacitors, and one dual opamp needed per partial filter, and that there are no trimpots required – the downside is that the capacitors must be selected.
I’ve made a stereo version, where even filter numbers go to one output, and odd filter outputs go to a second output. A “separation” potentiometer allows everything from Mono to extreme Stereo panning. It turned out that just a _slight_ amount of “separation” gives some pleasant room information without messing up the impression of a single sound source.

In addition to this 40-band Filter Bank, I’m using some parametric filters to emulate the Main Wood Resonance, Main Air Resonance, and Bridge Resonance of various sized string instruments. I plan to make an individual filter for Cello, Viola (Bratsche) and Violin, based on the plots in Benade’s book. Unfortunately, Benade doesn’t give detailed dB levels for his courves, so I have to try different gain and Q factors. So far, I have finished the Cello Filter. (which still needs some fine tuning of the Q’s and gain factors, no doubt! Also have to find the right width of the Notch around 1.5 kHz for the Cello.)  Viola and Violin will be next.

I don’t expect to get the sound of real string instruments (this needs some physical modeling of the bow/string system at least!) , but I want to gain some “organic” quality for otherwise electronic sounds.

CS-50 with typical electronic string sound: saw wave, filter quite open, some vibrato and level boost via aftertouch. First dry, then run thru a set of four parametric filters (Wood resonance, air resonance, bridge resonance, bridge notch) and thru the 40-band GIC filter bank. (Sorry for the hum – this was a quick and dirty recording and I have caught a bad GND loop.)

Not related to string instruments. A percussive arpeggio from the OB-8, first dry, then after 11 seconds switched to the 40-band GIC filter. Resonance gradually increased. First just some warmth added, then quite unnatural ringing of the filters.

To bee continued. Hints for improoving Q and gain factors welcome. Circuit to be disclosed later – not quite finished at the moment.

Meanwhile, here are some pictures: 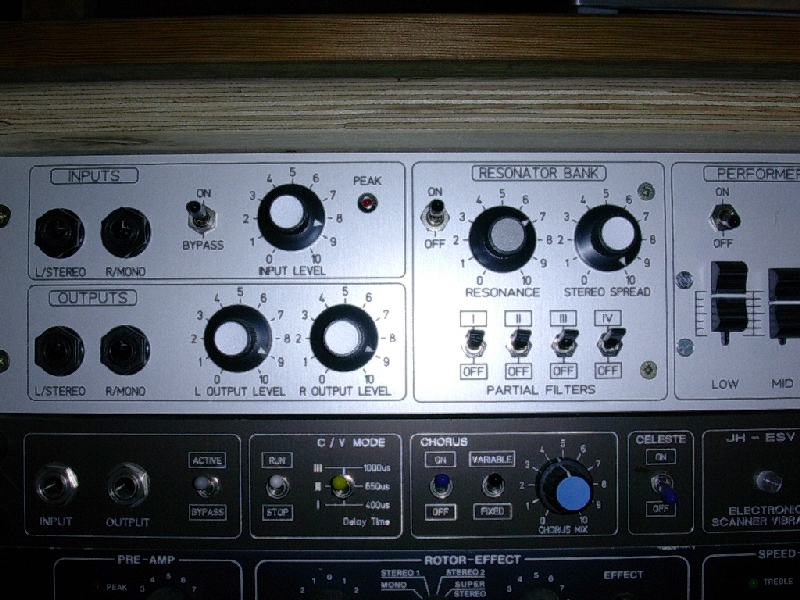 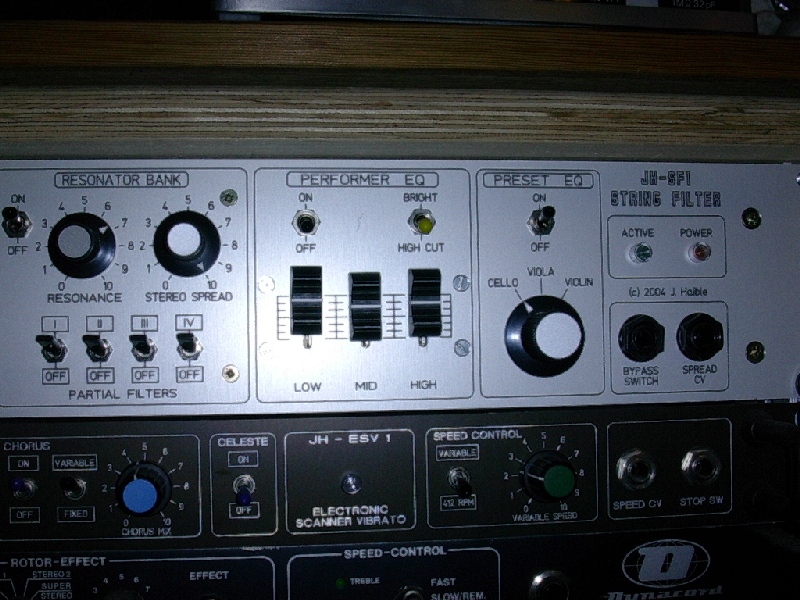 String Filter 2008
The biggest difference, compared to the old string filter, is that the new one has trimpots. No more measuring and selecting capacitors.
And the new one has voltage controlled resonance.
Here’s a glimpse of what  the new PCBs will look like: (You need two PCBs for a 40-band filter bank) 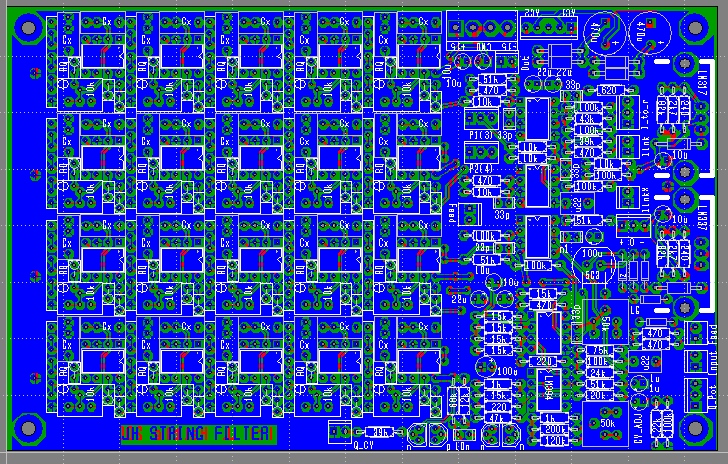 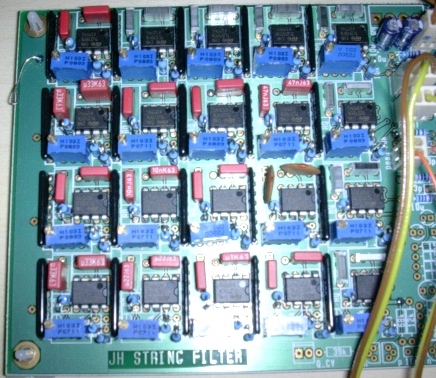 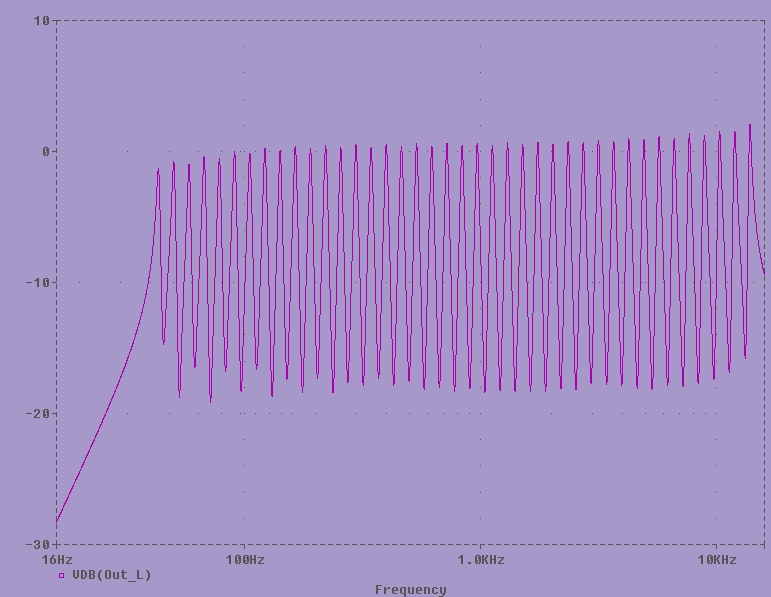 Cello Filter  (will be part of a 3rd board, available in the future, together with viola and violin filters) 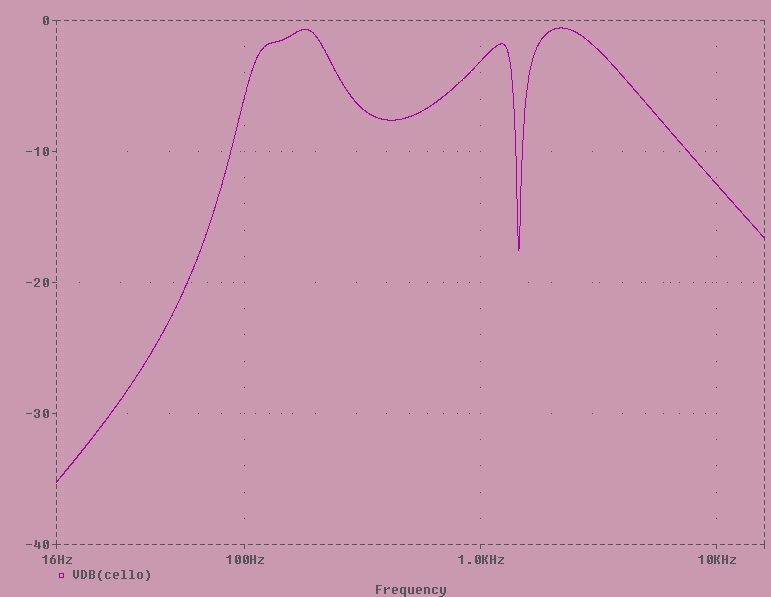 The Filter Bank part creates a lot of equally distributed resonance peaks – this is responsibel for the “woody” character:
http://www.jhaible.heim.at/string_filter/filterbank_plot.jpg
That’s the part that is common to all string instruments, more or less.
(Board 1 + 2, what I’m taking preorders for now.)
The resonance control changes the height of the peaks vs. valleys for all peaks in common.
The Equalisation emulates the frequency response due to body size (dimensions of the wooden body and volume of air, plus dimensions of the bridge). This is different for each instrument. The picture here http://www.jhaible.heim.at/string_filter/cello_filter_plot.jpg shows the equalisation I’m using for a Cello. This, and similar EQs for other instruments, will be on Board 3 (not specified yet).
Boards 1 + 2 are designed such that you can also connect 40 potentiometers to get a fully variable 40-band filterbank. 🙂
If you do this (40 sliders anybody?), you don’t need any extra EQing – you can simply draw the courves with the slider position.
But I think a 40-slider filterbank is not for the faint of heart … I just wanted to mention it. 🙂
Part of the standard implementation, however: 4 toggle switches to thake out every fourth resonant peak (or 2 out of 4, or 3 out of 4), for special effects.

String-like OB-8 Sound made more string-like with String Filter
(This is just the 40-band Filterbank in action; no additional Cello-Equalization as in the sample from the old String Filter!)

Generic Overlay, as silkscreened on the boards

The component density in the actual band pass filter blocks is too high to print all the component values  or reference designators onto the PCB.
But the 40 BPF blocks all have the same layout, so I’m giving a detailed view on one of the blocks in the picturte below: 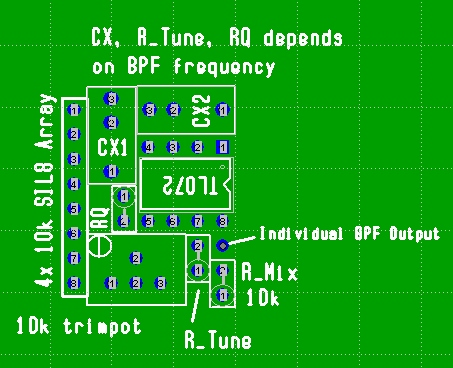 Each BPF block has the following components, regardless of its center frequency:

Each BPF block has the following individual components, depending on its center frequency:

PCB 1 and PCB 2 are the same board from the factory – they only differ in which componets you solder in.
Therefore, you only find “CX” etc printed on the board, and the above component overlay for PCB 1 and PCB 2 are mapped like shown below.
On the left is what you find printed on the board, and on the right is what you find in the component overlay you can print out from this web site:

Is this confusing? It may look so at first glance. But once you have the boards and the printouts in front of you, it will work like a charm.
(Hint: You won’t mix up the trimpot value with the R_tune value once the trimpots are soldered in, and hide the “10k” print.)

You may have noticed that the BOM mentions heatsinks for the LM317 and LM337 voltage regulators, but no particular heatsink has been specified.
There are footprints on the PCB for the same heatsinks as the Krautrock Phaser, but I do not recommend using these. Even though I tried them and you can see them in my prototype phote above. 🙂 They get very hot (depending on the transformer or wallwart secondary voltage). Because I’ve expected something like that, I’ve placed the voltage regulators at the edge of the PCB, metal part of the TO220 package facing outward, so you can easily mount a big heatsink there, and this is what I recommend.
Important: This heatsink must be electrically insulated from the LM317 and LM337.
I won’t describe the process of insulated mounting of TO220 packages on heatsinks in detail here, as it’s common practice. (Using thin mica sheets between the IC and the heatsink.) Just make sure ther is no electrical contact between the heatsink and the metal part of the regulators. (Measure it!)
You can get an idea of a possible heatsink construction from this picture (of the Scanner Vibrato). You only need one heatsink for both regulators, but you have to insulate them.
If you have a metal enclosure with a smooth metal surface on the inside, you might be able to just use this as a heatsink. (Also with insulated mounting!)
If you build a +/-15V DC supply version, no heat sink is required, of course. (There are no on-board regulators then.)

Here’s how the two PCBs should be connected together.