Note: This is a black panel, PCB & firmware chip only – for full kit go HERE

Stoichea (or Στοιχεῖα) is a dual Euclidean Sequencer. It algorithmically generates rhythmic sequences from an input trigger signal. The name (Στοιχεῖα, Stoicheia, or Elements) comes from the title of Euclid’s book Elements in which the algorithm was first described.

This goes way back. In the third century BCE, the Greek mathematician Euclid described a way to determine the largest common denominator of any two integers. As it turns out, his method is the same as what people have used to divide beats into rhythms. Across the globe, from ancient to modern times; the rhythms that pervade human existence can be generated using the same, simple algorithm.

The cultural and historical range covered by these rhythms is nothing short of breathtaking. From Brazilian Samba and Bossa-Nova, to Bulgarian folk dances, thirteenth century Persian drum patterns, and complex poly-rhythms of West and Central Africa.

Of course, Euclid’s work can be applied to more than just rhythmic patterns. A scientist named Bjorklund applied it to nuclear physics, in order to optimise the operation of the SNS particle accelerator. He also published his work with a proof of the efficiency of his method. Then, in 2005, a Professor of Computer Science called Godfried Toussaint linked up the dots and presented in a research paper the connection between the work of Euclid, Bjorklund, and musical rhythms.
We have based our implementation on the work of Toussaint, Bjorklund and Euclid.

Connect the left sequence output (second jack from the bottom left) to an envelope gate input controlling a sound source, or something like the trigger input of a drum module.

Make sure the middle switch is in the centre position, and the left switch is in the up position. Now connect an LFO to one of the two clock inputs (bottom left or bottom right jack) and you should see the centre LED light up when a signal is received. If the LFO is very fast, the LED will appear to be dimly on – turn the speed down (or up) to where it is flashing at a regular pace.

Turn all the knobs in the left column to their centre positions. You should know have a sequence of length 8 with 4 fills (50% of the step length). This means that every other beat will be ‘on’, and you should see the sequencer LED flash on every second input clock. Consequently, the sequence output should generate a gate signal, triggering the module you have connected it to.

Now connect a different envelope or sound source to the other sequence and repeat!

Each sequence is controlled by a column of three knobs and a switch. The input parameters to the algorithm are sequence length and fills.

The length of the sequence, measured in clocks or beats, is controlled by the second knob from the top. The range goes from 1 (fully counter clockwise) to 16 (fully clockwise), with 8 in the centre position.

With its switch in the centre position, the sequence is turned off. To turn it on (Trigger Mode), push the switch up. In trigger mode, the sequence will switch its output high when receiving a clock signal rising edge (low to high transition), provided the next beat in the sequence is ‘on’. When the clock signal falling edge is received (high to low transition), the output will be switched back to low (0v). This means that the output trigger signals have the same pulse width as the input clock. So if the clocks are generated with very short pulses, the output triggers will be equally short. As a consequence, a pulse width modulation on the input clock signal will be passed on through the sequencer.

Pushing the switch down from its centre (off) position puts the sequence into Alternating Mode. In alternating mode, the output goes high on the first ‘on’ beat, and remains high until the next ‘on’ beat. In other words, the output toggles on every ‘on’ beat in the sequence. The up and down transitions occur on the rising edge of the input clock.

The centre jack can be used to connect a reset trigger. When a reset is received, both sequences restart at their first position. This takes into consideration the rotation setting: If sequence A and B have different rotations, they will remain offset in respect to each other. Reset can also be manually triggered by pushing the centre switch momentarily upwards.

The centre switch can be pushed down, which enables Chained mode. When chained, the two sequences are repeated one after the other, instead of concurrently. This is very useful to build up more complex patterns. In chained mode, the output of the combined sequence is available at both output jacks. On startup, the first sequence will play through to its determined length. It will then stop, and the second sequence will play through to the end, at which point the first one starts up again. For example, setting the first sequence to length 12, and the second to length 4, will result in a combined 16-step sequence. A reset signal in Chained mode brings the combined sequence to the start of the first pattern. Rotation works as in regular mode. Chained mode can also be used to create sequences longer than 16 steps.

A simple beat sequence can be written as a combination of dots and crosses. For example ...x...x would mean a sequence of 8 steps, with two on-beats. Furthermore, we can write the corresponding Euclidean pattern concisely as E(2,8). This simply means 8 steps with 2 fills; the exact distribution will be determined by the Euclidean algorithm. With this, we can write out what some of those patterns are:

(As described by Godfried T. Toussaint in this brilliant paper)

Στοιχεῖα is driven by a micro controller which interfaces modular signal levels through discrete transistor networks. It functions by responding to incoming trigger signals using the MCU’s built in hardware interrupts. The step sequences are pre-calculated in the main processor loop and updated when the knobs are turned, which means that the interrupts can be processed very efficiently. This leads to a very low on/off latency.

The circuit board has a 6-pin header which brings out the serial and reset pins of the MCU. It mates with an FTDI USB TTL Serial Cable. It is compatible with 3.3v and 5v TTL levels.

The MCU is an AVR ATMega168. It is loaded with the Arduino Bootloader, and can be programmed as an Arduino Diecimila. The firmware is dependent only on avr-gcc, and on Arduino/Wiring for the optional serial debug interface. 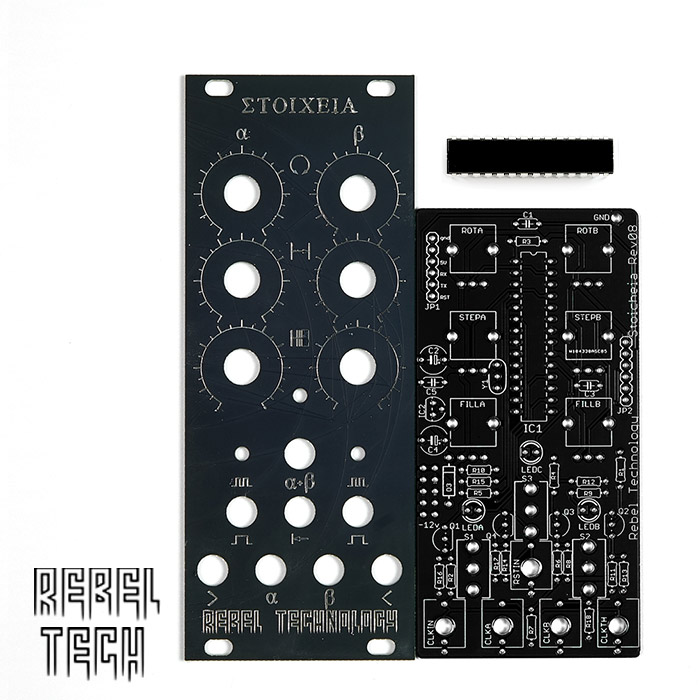