Note: This is a Panel & PCB set only – for full kit go here

The Triple Cap Chaos(C^3 Chaos) is a 2HP analog chaos module which can be used as a noise oscillator, pseudo ring modulator/harmonics generator, and audio mangler!

The “Emanate” potentiometer controls the coarser overall spectrum of the chaos, from lots of activity counter clock wise up to less chaos and more of a steady oscillation. The “Width, CV ATT” potentiometer can be thought of as more of a fine control for the chaos/oscillator. When something is inserted into the “CV” in the voltage normalization from the width knob is broken and the potentiometer now acts as an attenuator for the incoming cv. The Triple Cap is not a traditional volt per octave exponential VCO, and has a sort of narrow frequency range to exploit the chaotic behaviour.

The module expects a +5v to -5v max signal in to modulate the chaos. The “IN” jack is an A.C. coupled input for audio in, although cv and audio can work for both the “CV” in jack and “IN.” input. The “IN” will interfere and interact with the onboard chaotic oscillator depending on the frequency of the input, which may take some experimentation. It can create ring mod ish sounds, added harmonics, and almost bit crushed sounds depending on the “X” or “Y” output. The “X” output is a more windy noisy sinusoidal based output and the “Y” output is more squared off and aggressive, harsher sounding flavour.

Some quirks about the Triple Cap: The “X” output can offset negatively or positively a little bit depending on the pot settings, but both outputs tend to stay around 10vpp. With the “Emanate” and “Width” pots all the way up the typical frequency will be around 150hz although some modules will reach 200hz at this setting. With the “Emanate” pot full counter clock wise and “Width” pot full clock wise, the frequency will be around 250hz. It is possible to send signals into the triple cap that can bring it out of the desired range causing the oscillation to cut out.

The Triple Cap has a double sided panel. meaning one side has the classic graphics and the other is Soulless with less graphics(see image gallery). 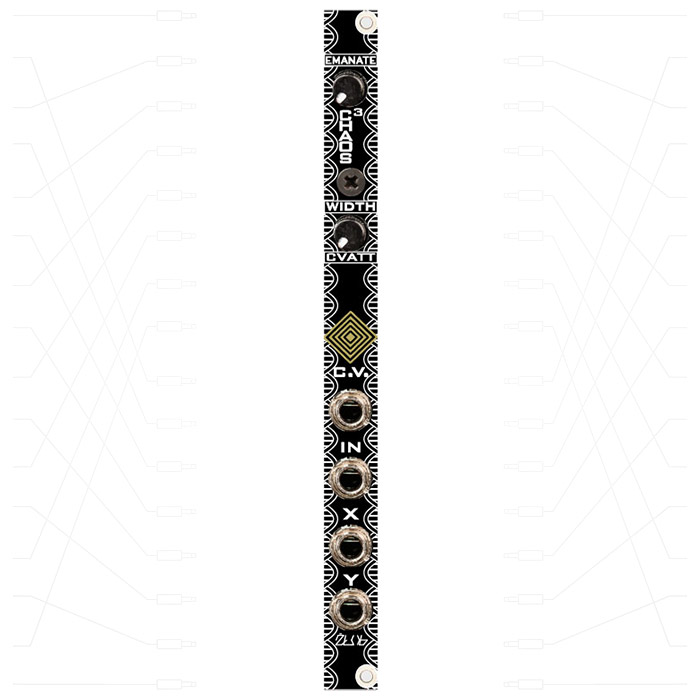