The synth is controlled by five knobs and 9 touch-pads. Multiple oscillators interact in deep and mysterious ways, and can be manipulated by an unorthodox resonant pseudo filter and a versatile power-starving section.

The Chernobylizer adds to the conversation surrounding the Chernobyl disaster and is an experiment in horror noise.  This comes from our own personal interest in Chernobyl and research into the radiation disaster.  The gold outline on the front of the PCB represents the decontamination zone and the white outline on the back is the exclusion zone. The four large capacitors represent the four reactors of the Chernobyl plant.  The touch pads are mutated forms, mutations caused by radiation. The touchpads control six power-starvable oscillators and three fixed ‘phantom’ oscillators. Each pad has 3 contacts; moving your fingers around on the pad and touching multiple pads at once warps the sound.

The power-starve switch represents the draining of power to reactor 4.  If the switch is turned downwards, power will slowly drain from the four large capacitors causing the synth to create a sound similar to the reactor losing power followed by a Geiger counter crackle, then to little or no sound as it is fully drained. Note: this is not an on/off switch but if the synth is making no sound it may have fully drained; turning the switch back up will restore power to the circuit in a full-on explosion of sound.  This is a rough reenactment of how Reactor 4 exploded.

The knobs controls the amount and character of power-starvation, the resonance and frequency of a kind of pseudo-filter, and a wet/dry mix. All the 5 knobs can be experimented with to create various explosive, loud, crackling noises and drones. Detailed PCB art covers both sides of the board. 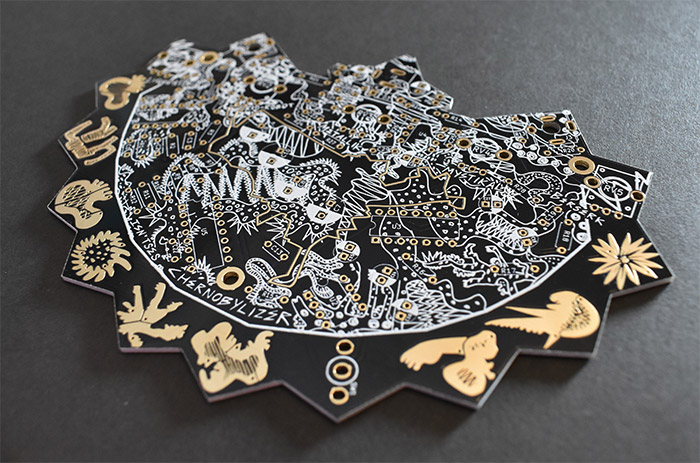 The synth has two outputs:

1. The output on the left is an audio output and includes all sounds coming from the synth.

2. The output on the right does not include sounds coming from the filter but includes all other sounds from the oscillators.  It is an unfiltered, DC-coupled output which could also act as a gate/trigger/LFO signal when connected to other synths or modules.  In this way it is compatible with various Eurorack modules and other synths which have CV, gate or clock input.

The Chernobylizer does not have an input.

The LED on the right lights up when the synth is on, and the one on the left flickers with the oscillators!

POWER SUPPLY FOR THE SYNTH – IMPORTANT

The Chernobylizer is powered by any standard BOSS-style 9v centre-negative power supply. Or it can become portable with a centre-negative DC-jack-to-battery-clip adaptor (not included).  Using any other power supply may cause the synth to short circuit so please be careful.

As this is an open circuit board synth, take care to avoid placing it on a metal/conductive surface while playing or you will short something out! It’s best to make some kind of plastic or wooden base for the synth, or to stick some small rubber feet on the bottom.

For more information on the development of the Chernobylizer, and more videos, please visit the Isn’tses blog: http://www.isntses.co.uk/blog or on Instagram @chernobylizersynth 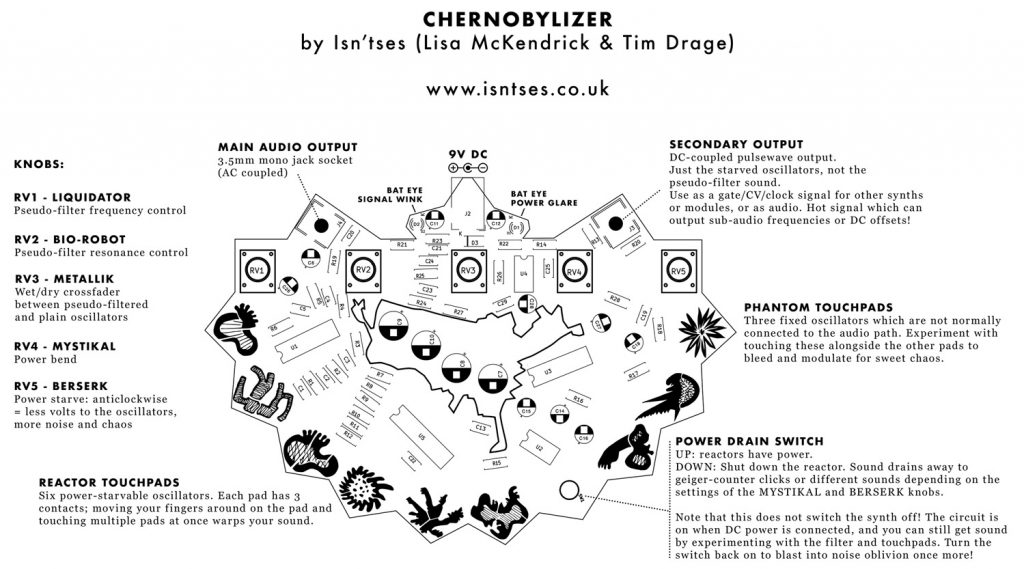 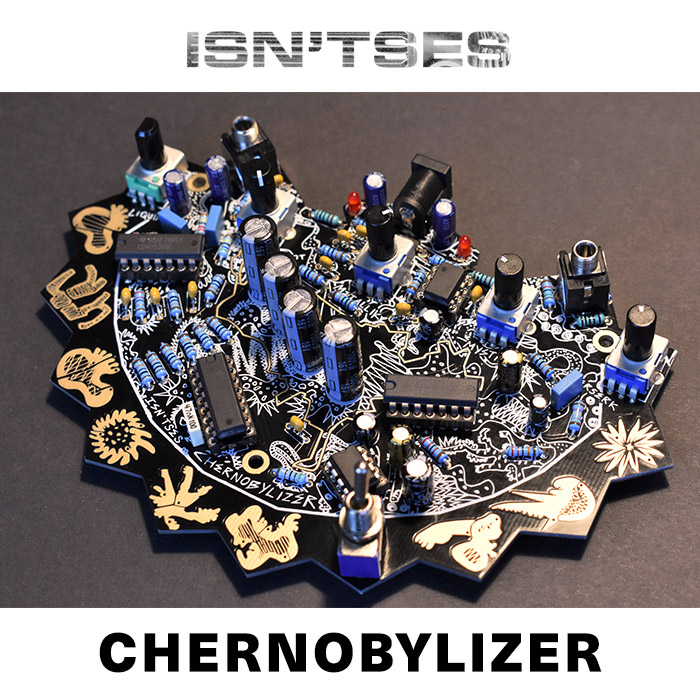